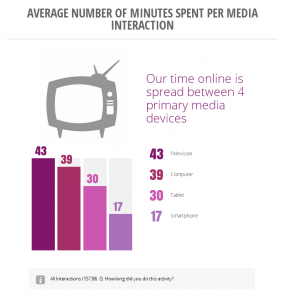 Secondly we review Google’s research and data points behind different devices and how users interact with the web. The mobile revolution to building content for multiple devices is an opportunity for companies small and large worldwide.

Multiple screen shopping is a new trend that is catching on quickly in 2013. “Window shopping” is still prevalent with brick and mortar stores, but the cost of online shopping, in addition to advancements in 3D printing can lead to a continued draw back from physical storefronts. It is our goal to help companies make the digital transition with the research provided by Google.

The infographic on average time spent with a device for media consumption displays that the television is still on top for the most used device for consumers.

Most of consumers’ media time is spent in front of a computer, smartphone, tablet or TV. Choosing which screen we use often depends on the context: who we are, what we want to accomplish and the amount of time we have. In this study, we’ll gain an understanding of consumer media behavior over a 24-hour period to find out how people use media, what motivates them, how they use multiple screens to accomplish tasks, how activities affect each other, how they use mobile, and the role of search. – Google Methodology 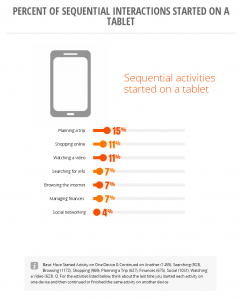 In this set of data points one can notice that consumers are making purchases based on a progression of consumption using different devices when interacting with a product. A note that can be made about this concept is that is may be wise to advertise products on multiple devices to enhance productivity.

The progression of a digital transaction is shown to start on cell phones most often according to the studies and research. The percentages of digital transactions that start on a desktop computer are close to half the amount of completed purchases compared to the cell phone starting point.

570FansLike
327FollowersFollow
4,583FollowersFollow
1,540SubscribersSubscribe
Crescent Vale 2010 - 2020 © Theme by: Newsmag
We use cookies to ensure that we give you the best experience on our website. If you continue to use this site we will assume that you understand our policies. Ok