The Werks Get by with a Little Help

The Werk Out Music and Arts Festival is returning this year to Thornville, Ohio for their 4th annual event. Top tier promoters and bands from the Midwest help put together this event, and the crowd continues to expand and evolve each year. Buckeye Lake is nearby the festival grounds, and there is plenty of scenic trails to take around the area. 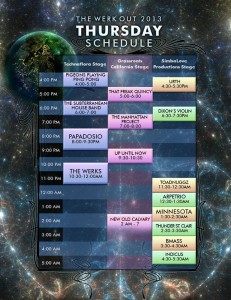 Tune in this Monday, September 9 from 10-12 p.m. CST for Matt’s Mountain Radio streaming live on WDBX Radio. Listen in this Monday for music by The Werks, GRiZ, Conspirator, EOTO and many more acts. Every Monday night we stream music featuring bands from music events nationwide. We are honored and excited to be streaming music by The Werks on the upcoming broadcast. Stream it online at http://www.wdbx.org/.

Pop off an awesome weekend with Papadosio and The Werks on Thursday night. Get wild late night with The New Old Calvary and Minnesota. Dabble in electronic rock, hardcore EDM, relaxing bluegrass and a variety of other musical genres on Thursday with The Werk Out Festival. 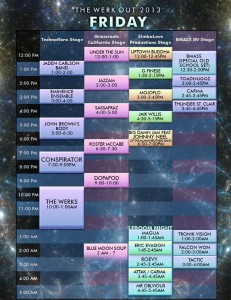 All four stages will be in operation on Friday. The weather around Thornville, Ohio is set to have wet conditions before the event, but should be clear skies for the event according to the weather outlook. It may be chiller with temperatures ranging from the 70-40’s, but the fall weather is expected in September.

Grab your friends and celebrate live music with Roster McCabe, Jaik Willis, Conspirator, Dopapod and many more talented acts on Friday. Extend the good times from summer into early fall with The Werks all weekend. Kick back, listen in, and jam out with phenomenal musicians. For tickets, check out the Ticket Link. 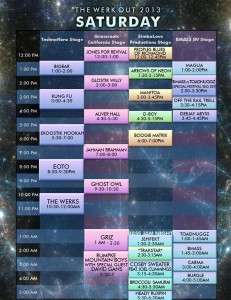 Cap off Saturday, September 14 in style with Ekoostik Hookah, EOTO and The Werks followed by a GRiZ late night set. Let the good times roll onto the night with amazing music going down on three late night stages til 6:30 a.m.

The Crescent Vale Network is planning on being in attendance this year. We hope to see all of your smiling faces at the 4th Annual Werk Out Music Festival. Guests have plenty of time on Sunday to be able to clean up, pack their gear, and head home after a heavy weekend.

Airbnb Is Set to have Increased Demand Within Indianapolis, Columbus, and the Canadian Rockies for 2018