The Werks Host A Classic Event in Ohio

Thornville, Ohio – The Werks hosted their 4th Werk Out Festival just outside of Columbus next to Buckeye Lake September 12 – 14. The Werks, EOTO, Griz, Conspirator, (featuring members of The Disco Biscuits), Ekoostik Hookah, guests, staff and a large cast musicians collectively joined forces in Ohio for one of the last music and camping festivals of the summer.

This marked the first year that I have covered the event. At the beginning on 2013, I was introduced to The Werks, and for the past 9 months, I have been just trying to catch up with incomparable momentum. This review picks up from where I left off following the North Coast Music Festival in Chicago. On Friday I picked up my Jeep from Pep Boys, and start driving to Columbus to hopefully catch a piece of the Jaik Willis set.

On my drive from Chicago to Legend Valley I listened to the radio most of the time. One of the songs that stuck out was ‘The Heart of Rock & Roll’ by Huey Lewis And the News. GRiZ is from the Detroit area, and The Werks clearly represent Ohio rock music on the largest scale. The Werk Out Festival hints at rock history in the making for those in attendance. It is also a clear sign that the heart of rock n’ roll is still beating, and it is beating in Thornville, Ohio.

When I arrived to the Legend Valley Campground on Friday the band Roster McCabe was performing on Grassroots California Stage. It was just after 7 p.m.and the sun had started to set. The air was crisp with fall weather rolling into Ohio.

Conspirator, featuring members of The Disco Biscuits, performed a Memphis style set of music on Friday evening. The majority of the set was slow and low, comparative to other performances this summer. I actually enjoyed their ability to slow down the pace and continue to deliver a solid set. When they did ramp up the crowd, it felt like a direct shot of adrenaline to the heart, (Pulp Fiction reference).

Despite it being Friday the 13th, my luck was going extremely well. The Dopapod set kept the crowd going with their blend of electronic rock music. It was a solid set overall. Disco Pizza was setup next to the main stage areas. Fresh baked pizza aroma filled the area. I picked up a slice and got ready for The Werks performance.

The Werks, hosts and musicians brought new music, classic covers and their traditional hits to the Technaflora Stage on Friday evening. Their original music was a good way to showcase their true colors as musicians. This event is now in its fourth year, and is a testament of the ability to be thoughtful hosts. It was my first time hearing them covering ‘Ramblin’ Man’ with Johnny Neel on keys, Brad Jackson on vocals, Jaden Carlson in Guitar. They broke out ‘Drop’ a new track for their Friday night set. Later in the set they performed ‘Walking on the Moon’

Saturday’s entertainment looked like a metaphorical stocked trout pond for any fisherman/fisherwomen. The Werk Out Festival is also stocked with amazing guests. I honestly haven’t seen a crowd this unified since 2004. It was nice.

Glostik Willy at the Werk Out Festival

Glostik Willy had an impressive marketing campaign which lead me to the band’s set on Saturday around 2:00 p.m. Their set of improvisational rock geared the crowd up to the right level on Saturday afternoon. The weather was perfect for an entire day of dancing in Legend Valley. 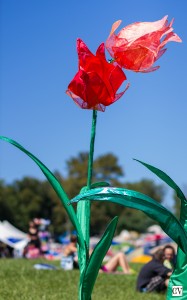 Aliver Hall took the Technaflora Stage just after 3:10. They switched stage times with Kung Fu. There was a supportive atmosphere that made this last minute change a minor problem. Overall the festival didn’t report any major issues. The Aliver Hall set was relaxing and entertaining for the most part.

Kung Fu started their set close to 4:10 on Saturday. The band from New Haven, Connecticut brought out the funk for The Werk Out audience. It was my second time experiencing their performance, and I felt a little burn from dancing/working out during their set. Upbeat funk music is easy to dance to, and is a healthy way to enjoy a Saturday afternoon. The Werk Out Festival overall was organically healthy way to celebrate early fall in Ohio.

Ekoostik Hookah, Ohio-natives surrounded the stage before their performance with a joyful presence. The band was laughing and enjoying themselves in the beautiful fall weather. I had watched Ekoostik Hookah perform at the Summer
Camp Music Festival years ago. Their set was a smooth ride from start to finish. The sun beamed down on the group just before sunset.

EOTO, a two piece from the West portion of the country delivered an action-packed concert on Saturday evening. The kings of improv music spoiled the crowd with their off-the-cuff live production. Jason Hann and Michael Travis
synced together their passion for live drums, bass and guitar in an evolutionary organic movement that is picking up international attention. Their set at The Werk Out was a call back to their early days of jamming next to the campfire.

The Werks returned to the stage for a third performance on Saturday night. West coast funk must have been in the air during the band’s cover of ‘No DIggity’ with Jason Hann on drums, and Colin Martin on horn. The Werks continue to blend classic songs with a modern analog interpretation. The crowd gathered together for the band’s last set of the weekend. Griz performed after The Werks on the main stage with regional and local acts closing out the music on the smaller stages.

This was my first time attending The Werk Out Music Festival, and I can’t wait to go back next year.