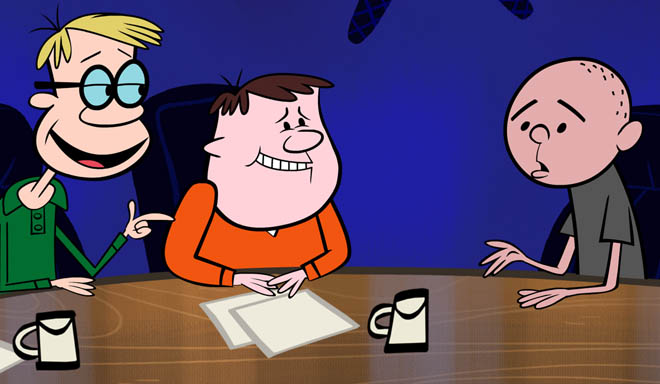 Ricky Gervais, director, actor, entertainer and comedian has spent most of his life working on comedy. He is currently working Derek, a British television comedy-drama. From 2005-2008 Gervais worked on a podcast featured on Guardian Unlimited. In the winter months of 2006, the podcast was consistently ranked the number-one podcast in the world, and in 2007 it received a Guinness World Record for most-downloaded podcast.

Ricky, Karl and Stephen Merchant have been a huge influence over the editors at Crescent Vale. During the days of the podcast, we would huddle around the stereo and listen in to the madness going on in their minds. Recently we tweeted to Ricky we would be more supportive of his work. So, I am added some additional commentary to some of the episodes within the YouTube Playlist above.

There has always been an off-balance in the studio between these three gentlemen. Stephen and Ricky gang up on Karl’s brilliance in hopes to change his mind. I support Karl’s view on reproduction. It’s funny that Karl’s view on an average life ends at 78. The 2010 worldwide expectancy is set around 67. Karl must be thinking in British terms.

A connection could be drawn to Karl’s view on reproduction. The Curious Case of Benjamin Button draws somewhat of a similar link to Karl’s point of view. The interesting thing about these two concepts is Karl might have needed inspiration for that idea, and may have read the book before the movie was produced in 2008. Maybe he just came up with a similar idea to F. Scott Fitzgerald, and no one realized it in the studio. Ricky says that hearing Karl talk is like hearing the sounds of a madman, I wonder what two madmen sound like to Ricky.

The ironic piece to the end of Clip 1 is hearing Karl point out that if Newton, (or F. Scott Fitzgerald said it, it would perceived as brilliant by readers and listeners.)
Clip 2 does take a bad turn for Karl when he aligns cavemen and dinosaurs, as they may have been illustrated in poorly produced elementary book.

Ricky brings up his attempt to improve the animal kingdom. This amuses me because he recently posted a photo of himself with wings on his back. I would fire back at Ricky after he asks Karl what does he think about his idea.

Rick, I wouldn’t bring that up on air mate. Rejection from Blue Peter is like having to host an award show without being nominated for statue.

Karl shows his distaste for reproduction once again. He asks at what point are we going to stop?

Karl, some people make babies just to keep up with their friends and family without any real reason. At least their not slugs.

Stephen and Ricky go over Karl’s diary to find out his most inner thoughts. Amazingly, Karl and his wife find pleasure in the small things to life, even car parks.

Overall, I respect the breakthroughs that these talented and comical minds have brought to entertainment. We hope to work with them more down the road. Cheers mate.