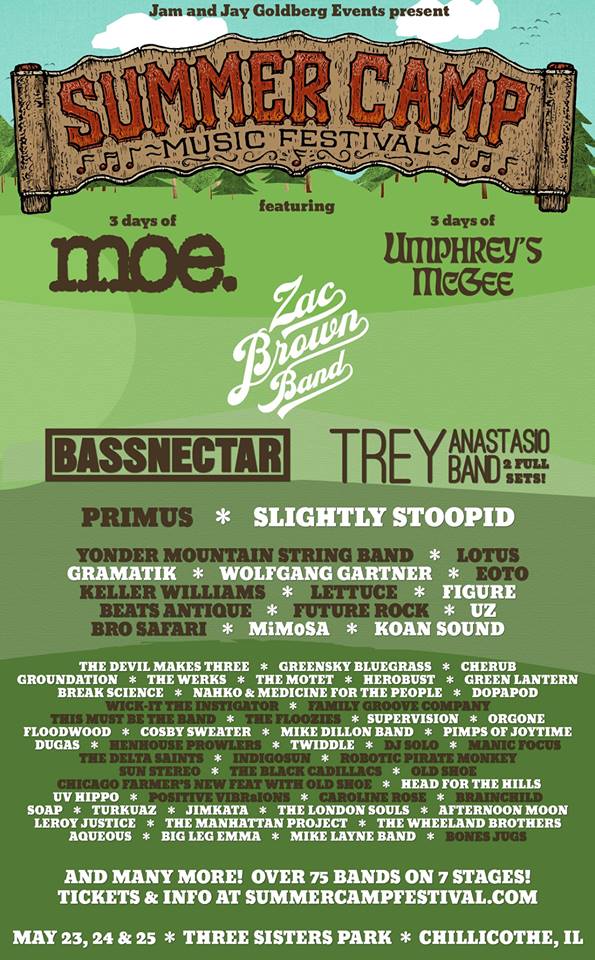 Valentine’s Day just heated up with a major artist announcement from the Summer Camp Music Festival. They released their second round of artists for their 2014 event, and the festival continues to diversify their musical lineup.

Their second wave of artists kept fans buzzing on social media all day. In addition to their stellar first round, this round featured Zac Brown Band as one of the main headliners. Watch ‘Let it Rain’ featuring Dave Grohl on drums to dig deeper into their sound. Find out more on their unique approach to alternative country.

Slightly Stoopid will be bringing relaxing reggae to Chillicothe, Illinois this Memorial Day Weekend. Take a breather and listen in to their track ‘Don’t Stop’. Become immersed with their sound from Ocean Beach, San Diego, CA.

Gramatik, Wolfgang Gartner, Figure, MiMosa, KOAN Sound will be traveling from Bristol, United Kingdom and many more top tier DJs will be on hand for this special weekend of music.

The Devil Makes Three will be returning to upstate Illinois this May. We just covered their Sundance set in Utah. The band mentioned taking the first part of 2014 to tour out west.

“This is our first stop on our west coast tour, and right now we are really high.” – @thedevilmakes3 | #Sundance2014

The Werks have been on a rampage so far in 2014. They have been added to the Summer Camp lineup once again this year. Last year they threw a bash on the Camping Stage, and has the drive to move up the ranks at multiple festivals this summer. Their #Scamp14 set will be one not miss.

Break Science lifted a rain soaked crowd last year with a special performance featuring Chali 2na on the Starshine Stage. Dip into their sound catalog to experience their electronic blend of hip-hop.

Umphrey’s McGee Releases ‘it’s not us’ from I.V. Labs Studio in Chicago