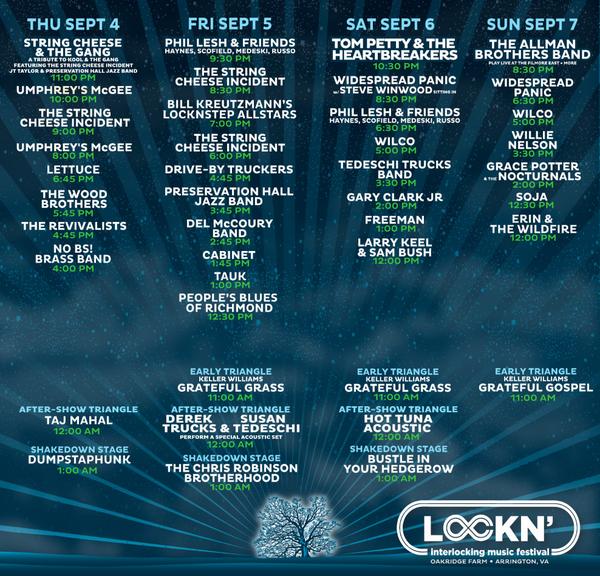 Explore the hottest event this September 4-7 with the biggest and best talent waiting to breakthrough at the Lockn’ Music Festival this year in Arrington, Virginia.

“We are BEYOND honored to get such a great slot at Lockn’!! Expect us to bring that Psychedelic FUNK experience that will have the crowd soaked in sweat by the time we are finished!” – Deitch

Except the stage to pop when Gregg Allman and the band takes the stage for the last run of their careers with The Allman Brothers Band. This set is beyond a show stealer. This performance lands in a category outside of normal sets for musicians. This set is the last time the band will play together in Virginia.

After 50 years of making memories nationwide, The Allmans are final calling it quits. Send off one of the greatest rock bands of all time at Lockn’ 2014.

Phil Lesh is a legend in the music industry. Find out who he shares the stage with at the 2014 Lockn’ Music Festival. It is a true blessing that Phil still has good health. He has the ability to continue to share music with an audience he has helped build for the past 50 years. Each time he hits the stage, everyone takes note.

These sets may be short on time, but there is a strong buzz surrounding the Lockn’ Music Festival, and there will be a good chance that SCI will attempt to tear the house down with the time on the clock. Umphrey’s McGee also will be facing some tough time scheduling during their sets. Be on the lookout for strong performances from both bands.

At 7:00 p.m. on Friday, September 5 the sun will begin to set over the Blue Ridge Mountains. During this time frame the Locknstep Allstars will be joining forces to steal the show on Friday evening. The last minute replacement for Bob Weir is now holding a strong set at Lockn’ 2014.

3:30pm THU SEPT 4
Jeff Sipe, drummer extraordinaire from The Aquarium Rescue Unit as well as too many others to mention. Melodic & Rhythmic Phrasing

1:00pm SAT SEPT 6
Oteil Burbridge from the Allman Brothers Band and many others. Art of Improvisation on the Bass

A $25 suggested donation is asked for these clinics. There is limited room .

Widespread Panic returns in fashion this year to Lockn’ with a special set featuring Winwood on Saturday evening. Watch the band get funky with Porter, and gear up for an unforgettable Saturday set, but as we all know with Widespread Panic, never miss a Sunday show.

Flip through our 2014 Lockn’ Music Festival Flipboard to see more on Tom Petty and his latest #1 album. Catch the Heartbreakers live at Lockn’ with a star studded cast of prime time musicians.

Keep an eye out for Keller Williams looking to steal the show as well late night and with the Locknstep Allstars. See you next weekend in the heart of Virginia.

Matthew McGuire - April 22, 2021
Thursday, April 22 marks the celebration of Earth Day across the globe. Individuals around the world take time out of their day to conserve...