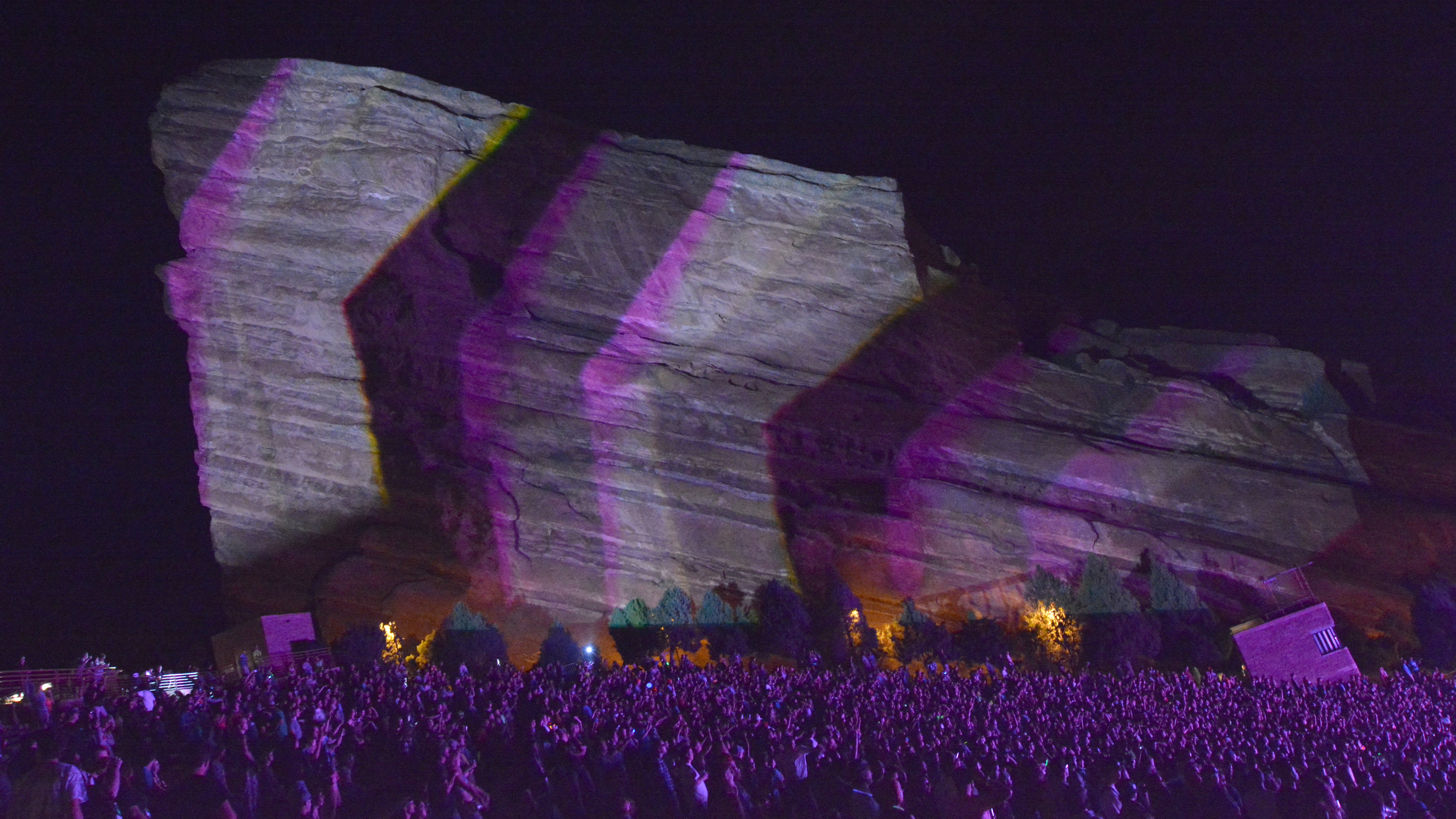 Morrison, Colorado — Big Gigantic returns to a capacity crowd at Red Rocks Amphitheater this past September 26 & 27. Rowdytown 3 continues to make modern history with an annual hometown throw down with the duo that originally made their mark on music in Colorado.

The energy surrounding the event created a mass buzz for guests needing to see the live concert in person. That buzz shaked and rocked the historic two, three hundred-foot monoliths (Ship Rock and Creation Rock) walls that makeup Red Rocks on Friday and Saturday evening. Big Gigantic originally started in 2008, and has been on a roller coaster ride with their fan base since their inception.

This year marks the bands third time hosting the rowdiest party of the year on Red Rocks. Dominic Lalli, Jeremy Salken make up the heroic live EDM group. We first started getting into their music in 2010, and this is the first time we have seen them in 2014. They cracked open new material on both nights.

Savoy, DVBBS, The Floozies performed during the early evening hours and into the night on Friday. Trippy Turtle kept the music going on both Friday and Saturday night with 2 tweener sets.

Jessica Yoches stepped up to work on photography with our outlet for this event. She lives in the Colorado, and has a real passion for the music scene. It was great having a female perspective to add to the content. She noted that The Motet had been evolving their sound as a group, and was interested to see how that would parallel with the band backing Big Gigantic.

We arrived to the Trading Post right before the Caked Up performance. It was an honor to be apart of the event. The venue is the most professional and structured individual company that I have been able to work with in 5 years of covering music. During the Caked Up set Saturday night we were able to network with other members of the media from Colorado.

The media manager for Red Rocks was extremely thoughtful of how to grab the best photos possible. She pointed out two out of the three guest spots that would occur. It was nice that she left the Griz guest spot as a surprise. He came out to help Big Gigantic get into ‘Power’ during their top notch performance.

Big Gigantic got the crowd shaking early with a Macklemore and Ryan Lewis remix into ‘Let’s Go’ to open up their set on Saturday night. The duo samples hip-hop tracks, and remasters them live on stage. They add their style of drum and sax combo, and deliver their own songs as well, and sometimes they perform remixes better than the original. After seeing Jay-Z live in concert, I would get into ‘Can I Get A’ remix by Big Gigantic over Jay’s original work.

Another 15+ hr work day in the books! #letsgo

[av_one_half]Dominic from Big G talked about how much time and work he put into the production for Rowdytown. The performance on Saturday was one of the top 5 sets of my life. Each element to the concert was thought out extremely well. The 3D mapping on the rocks, an opening to a massive encore in the middle of the crowd, and the video editing on the jumbotron big screen during Big Gigantic’s set. The quick cuts were great, and the close up of the girl up front shaking her knees was one of the most entertaining things I have ever seen in concert live coverage. Nug.net did a live stream of the show.[/av_one_half]

Each guest spot, and every musician that shared the stage was dialed in. The timing was tight, and the pre-production work showed. GriZ stepped up with a surprise guest spot to help out on ‘Power’. It was comforting seeing another midwest face in the group. The crowd was mainly made up of Colorado natives, but there was a solid mix of nationwide guests supporting Big Gigantic and guests. Dominic announced they would be back next year. We hope to share Rowdytown 2015 with the family.

Matthew McGuire - November 20, 2020
Dive into a recap of the most exciting hour of television with Shark Tank on ABC.

Matthew McGuire - November 17, 2020
The Sundance Film Festival is scheduled from January 28 to February 3, 2021. This year the festival is going to be presented virtually.

569FansLike
327FollowersFollow
4,504FollowersFollow
1,540SubscribersSubscribe
Crescent Vale 2010 - 2020 © Theme by: Newsmag
We use cookies to ensure that we give you the best experience on our website. If you continue to use this site we will assume that you understand our policies. Ok