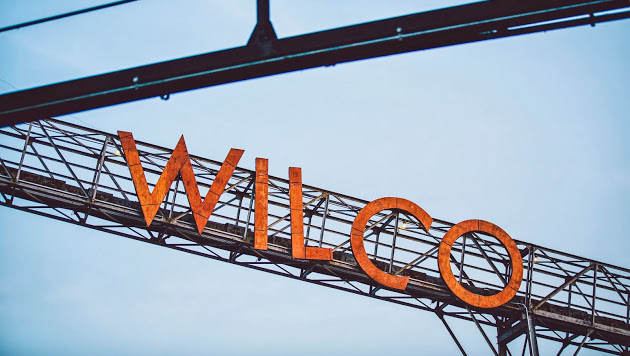 The band, made up of six members, began their musical journey together in Chicago, Illinois in 1994.  In the twenty years the band has been playing together, they have released eight studio albums as well as a double disc live album.

In 2004, after the release of their fifth studio album A Ghost is Born, they received two Grammy awards, including one for Best Alternative Rock Album.  As a fan, I attended a Wilco performance at the Alabama Theatre in Birmingham, Alabama shortly after the band received their Grammy.

During their performance, Jeff Tweety, lead singer and guitar player, made the comment that he was pleased to have won this award without being played all over the radio.  He continued to break out into a jam that was dedicated to the bands being played on the radio everyday.

The music that Wilco creates has a distinct sound, with Jeff Tweety belting out lyrics in a desirable whine, while acting like a mad scientist using his guitar’s distortion—something that has been a trait of the guitar player.  The band includes:  Glenn Kotche on drums, Mikael Jorgenson on keyboard, John Stirratt on bass, Nels Kline on guitar, Pat Sansone (a multi-instrumentalist), and Jeff Tweety as singer and guitar player.  The six-person alternative rock band, with a heavy Beatles influence, has blazed a path of awesome glory throughout the past 20 years; and did so without the help of major radio station promotion.

Yankee Hotel Foxtrot, an album that was rejected by their former record label (Reprise Records), was picked up by another subsidiary of Warner Music Group and became one of their most successful as a breakthrough album.  This album is filled with a wide-range of lyrics, from politically driven songs such as Ashes of an American Flag, to songs about past love like Heavy Metal Drummer.  The band creates very emotionally-driven songs, from the bottom (sad) to the top (happy).

Wilco has triumphed the last 20 years with the loyal support of their fan base and their creative musical abilities.  As a fan myself, who hasn’t attended a live performance from this band in ten years, I am ecstatic about their two night run at Lock’n Music Festival, where they play on September 6th and September 7th, 2014.

570FansLike
327FollowersFollow
4,578FollowersFollow
1,540SubscribersSubscribe
Crescent Vale 2010 - 2020 © Theme by: Newsmag
We use cookies to ensure that we give you the best experience on our website. If you continue to use this site we will assume that you understand our policies. Ok