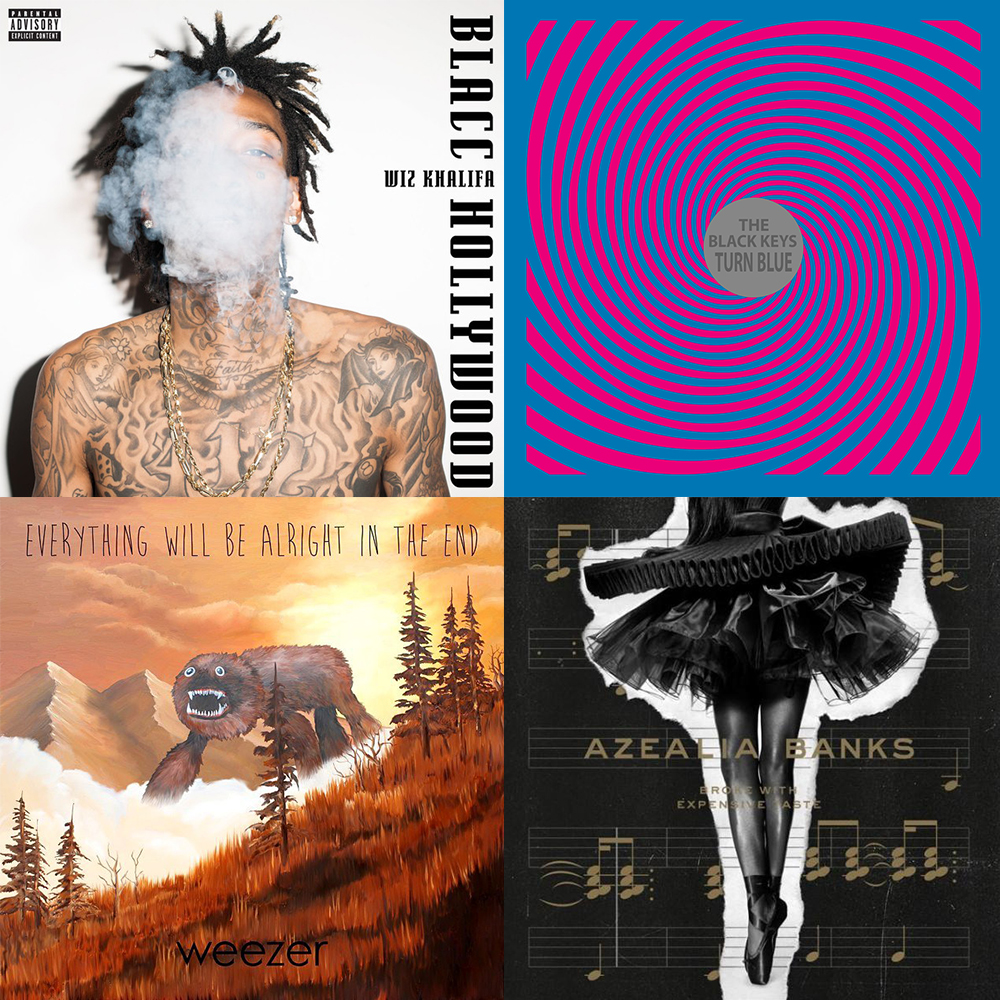 Azealia Banks, Wiz Khalifa, Calvin Harris, Weezer, The Black Keys and many other musicians pushed the boundaries in their own way in 2014. The record industry has been in a major state of influx with record companies making the digital transition.

The following albums showcase artists that have dared to take risks, and have not only taken risks, but have successfully create new space for others to be creative. We want to inspire artists to push the boundaries at all costs.

Azealia Banks showed 2014 what Harlem is really about. The poverty stricken area may seem dim, but Banks is an example of the positive light that can shine in the strangest places when one is looking at it right.

Her work reminds me of a sunshine daydream.

This may seem bizarre for those that feed into the mainstream press, but for those that can see the depth in Banks, her music is the most refreshing production of the year. “Broke with Expensive Taste” is the most progressive record of 2014.

Banks and company collectively put EDM, hip-hop and aggressive alt. rock in a blender for a spiked afternoon cocktail. Her gritty attitude is unmistakably one of her finest attributes. It flows right through her voice and message in the music. “Broke with Expensive Taste” is the top record of 2014.

Record Store Day is another hot topic that is gaining momentum. Bands that took advantage of the resurgence this year include: The Flaming Lips, OutKast, Bruce Springsteen, Jack White, R.E.M and several other classic artists.

The crossover album brought Wiz additional mainstream support. His organic talent is now being supported with experience from his first four albums. This fifth album takes listeners on a gripping ride from start to end. ‘KK’ is one of the tracks that stood out with additional lyrics by Juicy J and Project Pat. It brought me back to the days of Three 6 Mafia with Wiz and the beat adding a modern touch.

Nas and Snoop makes appearances on the “Blacc Hollywood” to help give it weight with their international presence. Each guest spot helps aid Wiz during his peak.

The Hangout Music Festival is great to pick up on the latest and greatest performers in Gulf Shores, Alabama. Wiz and his Taylor Gang crew created one of the biggest buzzes at the event this year. He continued to tour throughout the year in all points of North America.

[av_dropcap1]C[/av_dropcap1]alvin Harris, took over pop music in 2014. His crossover style of taking big beat electronic dance music, and mixing it with sultry sounds of young female vocalists has been a recipe for success.

In addition to his success in music, Harris has also recently scored a cameo for the most recent trailer for the upcoming Entourage film. It provides an excellent look at pop culture crossing over between music and film.

Most streamed song ever in 1 day?! What a welcome home

“Motion” is his 2014 release with ‘Blame’ being the lead single from the album. It was released in late 2014, and featured:  Ellie Goulding, Gwen Stefani, John Newman and Tinashe; rapper Big Sean; DJs Alesso, R3hab, Ummet Ozcan and Firebeatz; and the groups Hurts, Haim and All About She.

It was the Scottish DJ’s fourth album, and the sales behind the album fell a little short, but ‘Blame’ was all over mainstream radio, and gave Harris even more creditable with mainstream radio.

The Black Keys are up for Grammy’s this year for “Turn Blue” out on  Nonesuch Records, and had assisted production by Danger Mouse.

It was the band’s eighth studio album, and marked the fourth time that the band and Danger Mouse collaborated together.

The band took breaks from touring the world in 2013 to record this album. The Black Keys have been putting the fever in audiences all over the globe, and continue to break new ground leading into 2015.

Everything Will Be Alright in the End – Weezer

[av_dropcap1]W[/av_dropcap1]eezer continues their +20 year run with “Everything Will Be Alight in the End” on Republic Records.

In January 2014, the band started to record their ninth studio album with producer Ric Ocasek, who previously worked with the band on their first two self-titled albums.

This decision to bring back Ocasek was a stroke of brilliance. The band just needs to bring back Matt Sharp on bass to duel with Scott.

Brian and Pat provided classic Weezer style on the drums and lead guitar, as Rivers delivered his patent vocals and rhythm guitar.

Plenty of digital producers got the hands dirty this year, but Lance Herbstrong’s “Knobturner’s Guild” was an excellent display of the combination to analog and digital music.

“The Age of Reason” by Gramatik is one of the more timeless records of the year. His ability to produce high-end music, and release it for free turned 2014 on its head.

As artists attempt to find ways to capture new audiences, Gramatik and the Low Tempo crew have been doing a smashing good job with their online ideology.