The Fall of Rome Went Better Than This

If television killed the radio star, Apple wants us to believe that YouTube and filming live performances killed the iTunes star.

CNN reports that Apple plans to use the technology to stop illegal filming in movie theaters and concert venues. In many cases, I agree with it blocking people from filming movies and comedic acts, but disagree that all artists feel the same way about being advertised for free by their fans via online video.

Apple seems to not want to invest in research and development that will empower users, but instead, they plan to kill off products by trying to place the blame on concert-goers.

It reminds me of the recent events circling the Brexit vote. You have a select group of people that want to avoid immigration, instead of working with immigrants, putting resources into them, and rebuilding the country stronger. In comparison, you have Apple that wants to divide the live recording industry, and also is experiencing a negative reaction to their stock in the process. Apple’s stock has been in a negative trend for the past month and a half. This news will most likely not help their stock overall.

Mashable noted that Apple may not use the technology, and may just want to patent for themselves. They also cover the infrared emitter. 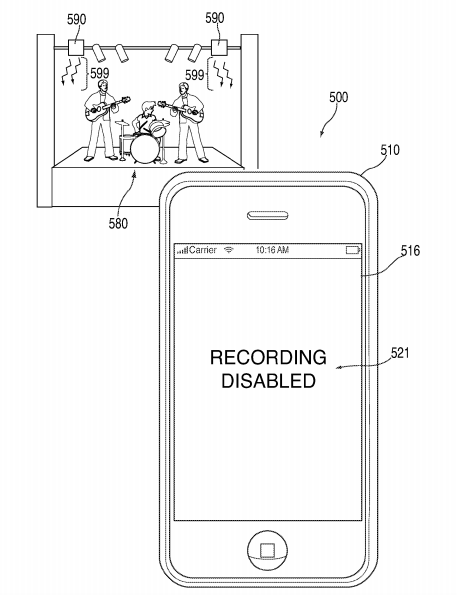 The patent reads: “An infrared emitter can be located in areas where picture or video capture is prohibited, and the emitter can generate infrared signals with encoded data that includes commands to disable the recording functions of devices. An electronic device can then receive the infrared signals, decode the data and temporarily disable the device’s recording function based on the command.”

Mashable additionally noted that there would need to be a sensor placed in the area to prevent live recording. So, that would mean only venues with enough money and desire to block their fans from recording events, would have the ability to block the iPhones with updated technology. We might see fans crowdsourcing which venues do not allow filming, and a decrease in large scale venues, and a continued rise of independent/smaller scale venues. (Much like the vinyl industry.)

Here is the truth, filming live performances and rarely uploading 30 seconds films does not impact the recording/publishing industry. Major companies like Spotify, Apple Music and Pandora suck the financial growth from the artists, and benefit a select few that own these companies; that impact on the music industry is far more dangerous than fans filming live shows.

In a recent report by The Atlantic, they note the decline in online sales in the music industry.

Nearly every number in Nielsen’s 2014 annual review of the music industry is preceded by a negative sign, including chain store sales (-20%), total new album sales (-14%), and sales of new songs online (-10.3%). Two things are up: streaming music and vinyl album sales.

One quick note, when I first started journalism, I took a photo of a band with a smartphone in 2006, and wrote a blog post about them. Over the past decade, I went on to develop skills with photography and videography, and have been paid, and rewarded by bands for all my hard work. What if I never had that chance? Well, some wouldn’t be reading the truth about this story right now. In connection, an independent mind, is the opposite of what Apple desires.

There is very few acts that make it to a major label, and normally, they only stick with a major label for a few years. Independent bands need exposure to grow. They need their fanbase to be able to record their live sets, and reproduce them online to give potential viewers a preview of their work. Major label acts need this exposure too, but rarely realize that the promotion that their label provides is never enough. What if Sony had created a way to block Grateful Dead fans from reproducing their shows?

Apple works directly with the major labels to increase profits. That is what this is all about. They want to be able to control everything, even the way you think.

The Hacker News recently publish an article on Apple’s patent, and their ideas what the real reason the company wants to develop the new technology.

Stop letting major corporations control the way you think. Deprogram yourself by turning off the television, radio and streaming services such as Apple Music. Regain your intellect by making your own music. Write songs, rehearse them, and if your lucky, maybe one day a fan will record the song, and post it to YouTube.

Government Shutdown Avoided with Budget Deal Being Passed by the Senate

Shark Tank Deep Dive: 15 Skills to Learn and Use for Entrepreneurs and Startups

568FansLike
327FollowersFollow
4,539FollowersFollow
1,540SubscribersSubscribe
Crescent Vale 2010 - 2020 © Theme by: Newsmag
We use cookies to ensure that we give you the best experience on our website. If you continue to use this site we will assume that you understand our policies. Ok