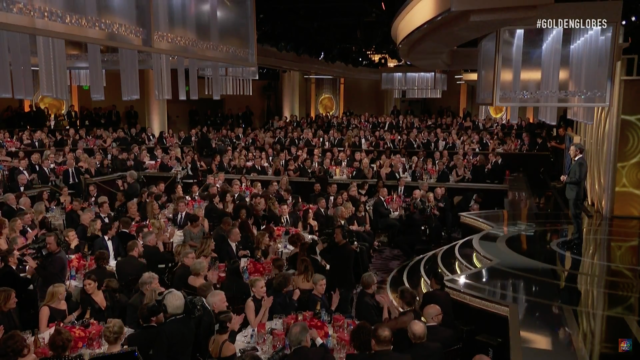 Watch over a large selection of highlights of the 75th Golden Globes from Los Angeles.

The Red Carpet was filled with thoughtful men and women standing up for equality.

One of my close friends, Suzanne Cline added to this important discussion. She noted:

A show of unity and support was evident at the Golden Globe award tonight. In place of walking the red carpet to show off designer fashions and glamour, the stars wore black. This creative Union banded together to empower women in the entertainment industry, as well as all women in the workforce to no longer tolerate the injustice resulting from sexual harassment, assault and inequality of women in the workplace. The blackout message was clear and consistent throughout the awards. Numerous female as well as male artist spoke out in support of the fight to end workplace misconduct without the fear of retaliation. This show of support was initiated by the newly organized campaign Time’s Up.

Time’s Up was founded by 300 women from the entertainment industry, who came together to provide solutions for women who have been victims of sexual misconduct in the workplace. Many women feel powerless to report sexual misconduct and the inequality that is inflicted upon them. The collation’s goal is to have no woman suffer such workplace intolerance alone and that every woman feel the power of all women uniting together to support them in eliminating this type of repression.

Time’s Up advocate for more women in the administrative positions and a call to all women that witness workplace injustice to step up and report this behavior. In addition, the campaign has designated a GoFundMe account.

As of today, Time’s Up’s efforts have been instrumental in raising $15 million with over 41,000 people donating to the GoFundMe account. The money will be used for a legal defense fund, designated for any woman that has suffered sexual harassment while performing her job duties. The fund will be managed by The women’s rights foundation this organization will ensure that any woman that cannot afford to defend yourself against that horrific humiliation of sexual harassment from an employer, supervisor or coworker, has the legal assistance to pursue the issue in court. In addition to financial support, Time’s Up has implemented a website that women can access information on other resources to assist in their fight for equality in the workplace. The website is
timeupnow.com

The second video features a YouTube playlist via NBC. Continue to check back for updated content from the Golden Globes.

Stay updated with CNN as they keep track of the winners this evening.

Watch over these moments and more with the YouTube clips. Stay updated with the tweets and the live feed featuring #GoldenGlobes below.