In the Sonoran Desert just outside of Tucson, Arizona from January 25th-28th, artists, musicians, performers, gem and mineral enthusiasts, as well as those who march to the beat of their own drum gathered for the 12th Annual Gem and Jam Festival.

The Gem and Jam Festival coincides with the Tucson Gem, Mineral, and Fossil showcase – one of the largest shows of its kind in North America. The showcase lasts approximately one month and draws collectors from across the globe. It is during this time that Tucson transforms into an international mecca of rare gems and minerals, along with art and culture. The Gem and Jam Festival organically grew from this gathering and has blossomed into an event that stands on its own and compliments the gem showcase.

Live painters at their easels flank each stage and are every bit as much of a focal point as the musicians on the lineup. As one moves through the venue, it’s not uncommon to see attendees sunbathing in hammocks between the palms or relaxing in the shadows of huge art installations. This tranquil environment, rich in color and bursting with life, lends to the imagination that one has stumbled upon an oasis in the desert.

With two-nights of STS9 and Lettuce, along with artists such as Greensky Bluegrass, Emancipator, Railroad Earth, Big Wild, and Papadosio, made up this year’s Gem and Jam Festival lineup, and easily compiled the most stacked lineup in its history. This eclectic festival is also perfectly curated, with bluegrass and uplifting tunes during the day combined with progressively more inter-stellar acts throughout the evening.

After the main party comes to a close, and the night grows cold, the late-night Onyx stage begins to heat up. This stage is located indoors and lends to the idea that one is in an underground warehouse party. This year’s late-night entertainment boasted acts such as Maddy O’Neal, Russ Liquid Test, Jade Cicada, and Michal Menert.

Last year was a turning point for the Gem and Jam Festival as it moved to its current location and added camping availability. This year the festival continued to make improvements that set it apart as a destination winter-time camping festival. Walk in camping, which was situated on a soft grassy meadow and perfect for bare feet, was added for those willing to make a short walk. Two additional stages were also added, the Amethyst Stage which held workshops and classes, and the Onyx Stage which showcased local Arizona talent.

It’s hard to choose a favorite act at this year’s Gem and Jam Festival. On Friday, Railroad Earth set the headliners off with a distinctly positive tone. Emancipator then picked up the evening vibes, and eventually handed off the night to a very fresh and energetic set by STS9.

On Saturday, Lettuce brought the funk with ultra-fly covers such as ‘Bustin’ Loose,’ by Chuck Brown and the Soul Searchers and an instrumental ‘So Fresh, So Clean,’ by OutKast. Big Wild kept the dance party going, followed by Breaking Biscuits who turned up the heat even further with Prince’s ‘1999.’ STS9 knocked it out of the park with a dance-heavy set that featured songs from their new and unexpected album, Wave Spell.

Sunday was super chill. Head for the Hills started the day out with a fun-filled set that involved borrowed sunglasses and even a cape from the audience.

Random Rab, with an entourage of performance artists and a sunset backdrop lent to a relaxing atmosphere. Thiftworks, with his deep bass beats ushered in the darkness and set the crowd up to get moving. Lettuce played a lengthy set with new music that showcased their strong rhythmic grooves and breakbeats. They also flexed their vocal muscle with Nigel Hall belting out a compelling, ‘Everybody Wants to Rule the World,’ by Tears for Fears. Greensky Bluegrass closed out the festival with their signature bluegrass style and rock-n-roll attitude.

All-in-all the Gem and Jam Festival has a special flavor to it. The desert is a unique place, and its juxtaposition of warm sunny days and cold crisp nights seem to call for some sort of rebirth. Each day at the Gem and Jam Festival, attendees are given the opportunity to grow and reinvent themselves through the power of music, art dance, and sharing with one another.

In fact, it’s the people of the Gem and Jam that may be the real headliners. Love thy neighbor is a phrase taken to heart, kindness abounds, and everyone is willing to give you plenty of room to dance.

See you next year in the desert! 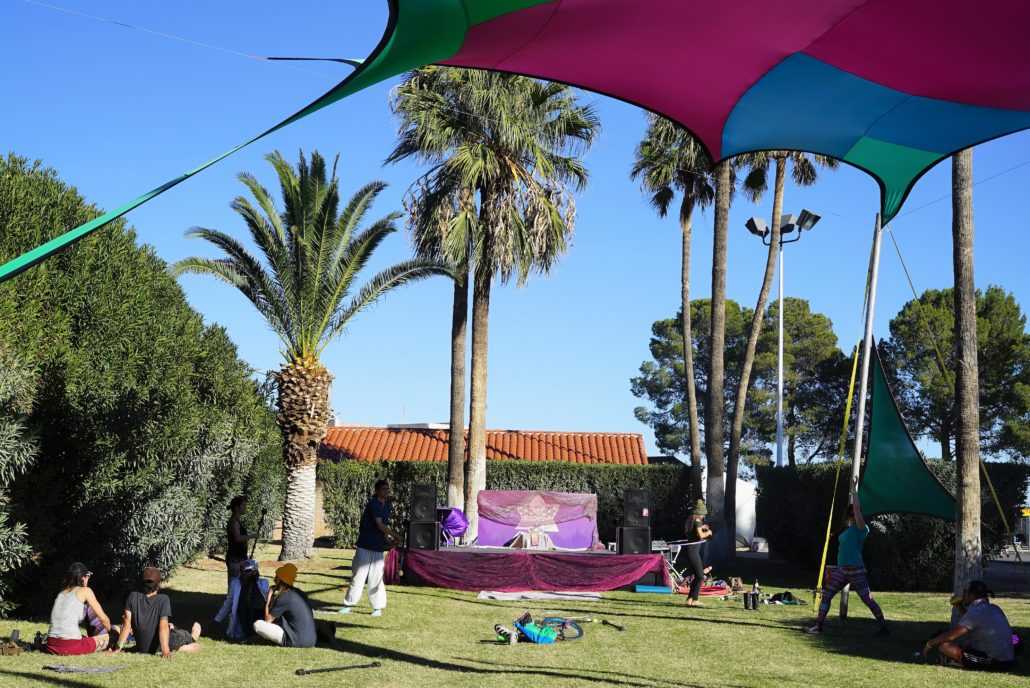