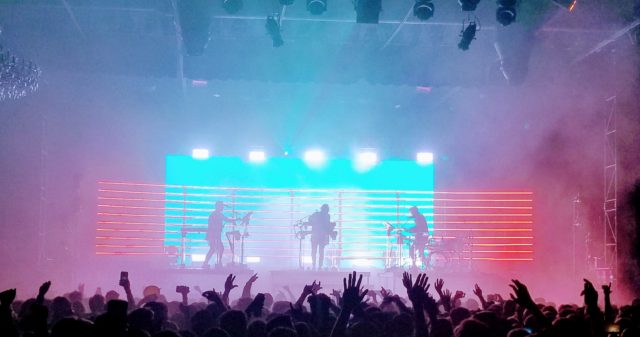 Lollapalooza, Red Rocks, Carriageworks, The Shine, and Additional Venues Host the Hottest Concert On the Road

The Australian fueled and Los Angeles-based band known as RÜFÜS DU SOL is taking over the global in 2019 with the Solace World Tour.

The band’s album Solace was released in 2018 and provided a window into their personal life. The transparency within the tracks made it easy to resonate with for audiences.

In 2018 I was able to catch the band at Decadence NYE to start the year in Denver, and at the Fillmore Auditorium near the end of the year. These shows were both unique and memorable.

In 2019 the band is returning to the Denver area to perform to sold out shows at Red Rocks Amphitheatre. The cooler temperatures in early October will blend well with the atmosphere of their live shows.

The band is also touring to Chicago for Lollapalooza. They will perform multiple sold-out nights in their hometown of Los Angeles at The Shine, as well as additional sold-out shows spanning the globe.

Browse over their upcoming tour via their main website.

Legacy: The True Story of the LA Lakers Now Streaming on Hulu