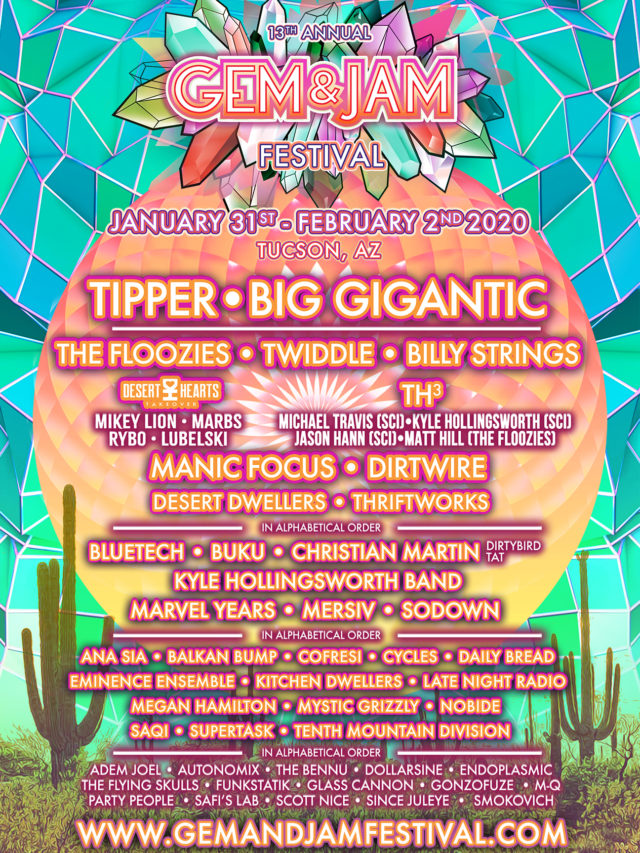 The Gem and Jam Returns Rested, Refreshed, and Ready to Rock Out

After taking a year-long hiatus, the Gem and Jam Festival returns to Tucson, Arizona January 31st – February 2nd for 3 days of camping, music, art and minerals from around the globe.

It’s been an exciting week for fans of the Gem and Jam. The festival started leaking headliners and teasing their fans last Wednesday, starting with Tipper. News of Big Gigantic, The Floozies and Twiddle followed shortly after.

On Monday 9/9/19, they released the full initial lineup, and ladies and gents…let’s just say it came back with a bang.

My most anticipated set, however, is TH3, collaboration between The String Cheese Incident’s Michael Travis, Kyle Hollingsworth, and Jason Hann along with Matt Hill of The Floozies. This is a never-before seen collab that certainly will be full of surprises, epic jams, and maybe even a couple of unexpected tricks.

However, Gem and Jam brings more than just a stellar musical lineup to the fan experience. They make sure everyone who attends feels like a VIP. The Pima County Fairgrounds provides amenities that most seasoned festies are used to paying extra for, such as free hot showers, flushing restrooms in the music venue, and a cantina with a legit happy hour. They also provide a free shuttle to and from the Tucson Gem and Mineral Show, the largest of its kind in North America.

So escape the cold and catch some great tunes in Tucson this winter. We here at Crescent Vale will provide in depth content to keep you on the up to date and a recap to help you relive your best festival life. Until then, take care and I hope to see all of you weirdos in the desert!

Stream and preview music from Gem and Jam with a YouTube playlist:

Elon Musk Acquires Twitter in a $44 Billion Buyout with Changes...