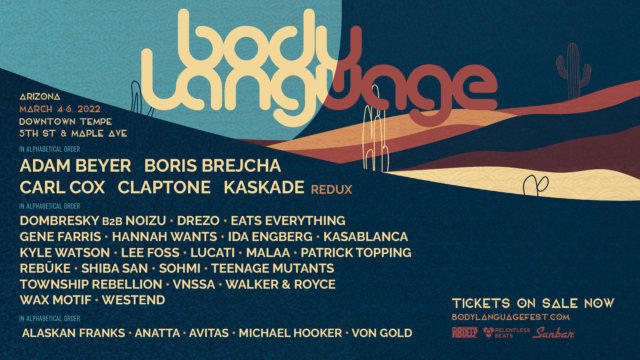 Body Language Music Festival is the newest edition to the Phoenix metro’s booming Spring festival season. This festival is dedicated to the underground sounds of house and techno genres. Body Language will make its debut March 3-6 in Downtown Tempe, Arizona.

While the three-day festival has something to please all fans, here are five must-see acts at Body Language 2022.

Kyle Watson is a producer and DJ from South Africa. He’s been redefining global house music with his own unique flair for more than a decade.

Watson was nominated by fans for Best Male DJ from Dance Music Awards South Africa in 2017. He’s sold out clubs and made festival appearances across his home country as well as Europe, Australia, and the United States.

Check out the video for his single “I Got You” for a preview of Watson’s body-moving beats.

Sam Walker and Gavin Royce, the duo who makes up Walker & Royce, have been collaborating since 2011. These two bring body bouncing drops and catchy vocal samples together to create a sound that can range from lighthearted and fun to dirty and exciting.

With the release of their debut album “Self Help” on Dirtybird Records in 2017, Walker & Royce solidified their place as some of the house music genre’s most forward-thinking and innovative artists.

Tracks like “Role Models” and “My Own Thang” speak to the duo’s versatility while retaining their classic signature.

Watch the video for “Take Me To Your Leader” below and you’ll see why Walker & Royce can’t be missed at Body Language Music Festival.

Walker & Royce will take the Labyrinth Stage on Sunday, March 6, 2022.

Hailing from Germany, Township Rebellion will give Body Language a well-deserved dose of techno on Saturday, March 5. The pair has been making music since 2012, touring across multiple continents to spread their uniquely produced sounds to the global techno genre.

Even if you’re not a big techno fan, Township Rebellion is worth checking out as they’ve only played in a handful of cities across the United States. Check out the trippy track “Red Planet” below to get a taste of Township Rebellion’s take on techno.

Township Rebellion will play at the Mirage Stage on Saturday, March 5, 2022.

Shortly after launching into the EDM scene in 2012, Drezo won the EDC Orlando Discovery Project, landing him a slot for one of the country’s biggest electronic music festivals. Since then he’s further solidified his unapologetic, borderline menacing approach to producing house music.

Drezo’s beats definitely bend the limits of what qualifies as house music, but for all the right reasons. Heavy basslines, an aggressive rhythm, and ominous vocal samples drive up the excitement for anyone listening to a Drezo track.

Listen to the track “Heaven” to get a taste of Drezo’s darker house vibe.

Stop by Drezo’s set at the Labyrinth stage on Saturday, March 5, 2022.

ANATTA is a more up-and-coming act performing at Body Language. He made his debut in the summer of 2020 and hasn’t looked back.

Even with such a short tenure in the house music scene, he’s supported acts like Chris Stussy, Michael Bibi, and SKREAM. You can expect upbeat lightheaded tunes with some funky influences at an ANATTA set.

As one of the main headliners for Body Language 2022, Carl Cox is definitely a must-see act. The British house and techno earned an honorable mention on this list due to his legendary status.

He’s been making original beats since the 80s, performing on curated stages at Ultra Music Festival, The BPM Festival, and Tomorrowland. The award-winning artist knows how to bring the heat to any live performance, and Body Language will be no different.

Watch this clip of one of Cox’s live performances in Ibiza to get a feel for the electricity this veteran brings to the decks.