Summer Heats up with Volunteers at WDBX

WDBX 91.1 FM Radio for Southern Illinois staff and volunteer team setup a Summer Block Carnival with only two months of preparation time. The event shut down a block of downtown Carbondale, Ill to showcase up and coming talent, carnival games and entertainment for the whole family on Saturday, July 13 from 12-9 p.m.

Dave Armstrong, station manager, Genie Schropp and Matthew Decker, WDBX DJs helped organize and plan the event. A beautiful group of vendors joined the downtown block party with the cast and crew at WDBX. The radio station wanted to provide a platform for young talent to feature their craft in front of a live crowd. Entertainment for the afternoon included: DJ live spinning, Wingtips, The Burning Hotels, 7 Day Weekend, Skank, HighHorse and The Flowers of Evil.

In addition to live music, there was a dunk tank that WDBX DJs took turns getting dunked in the crisp and cool water. Jason Ross, host of Gypsy Nation, took the first turn in the drunk tank. 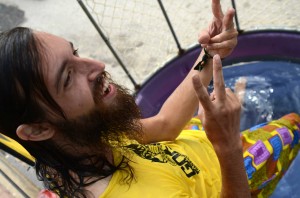 “It felt like a water park ride,” Ross said.

The live music throughout the day blended pop acts, raw punk, folk, rock and many more genres of music together in a seamless fashion that mirrored the melange of taste that WDBX is known for worldwide. Overall my favorite act of the day was The Burning Hotels. The lead guitarist is in more than one group, and doesn’t look like he has hit high school yet.

Piñatas were smashed, pies were thrown, cotton candy was delivered, hula hoops spun and adults and children enjoyed the summer weather together outside with WDBX 91.1 FM. It was an excellent event that the volunteer staff help organize. The station is currently working on getting a larger studio to accommodate on-air performances. If you are not already a member of WDBX, please donate at: WDBX Website.

The event featured well known WDBX DJs such as Star Child, Rock with the Ox, and Jean from Grandma’s Jazz all took part in the dunk tank. Children were on good behavior all day. They each took turns dunking the DJs in the chilly water. Browse all the action as in unfolded on the Facebook event page at: Facebook Link.

The Unemployment Rate in Southern Illinois Averages at 6.4 and the U.S. National Average is at 4.7

570FansLike
327FollowersFollow
4,583FollowersFollow
1,540SubscribersSubscribe
Crescent Vale 2010 - 2020 © Theme by: Newsmag
We use cookies to ensure that we give you the best experience on our website. If you continue to use this site we will assume that you understand our policies. Ok