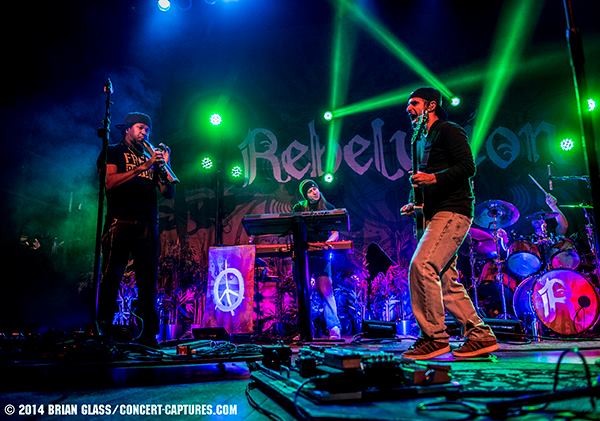 Eric Rachmany, vocalist and guitarist for Rebelution spoke with us on the phone as the band tours across country to go over their current nationwide tour, their upcoming album and more on the diverse band. Brain Glass captured the photos from the band’s performance at the Madison Theater on Saturday, February 8. Click and connect with his extended photo gallery. The interview was taken on Tuesday, February 11.
Thank you Eric for taking the time to speak with us today. Lets jump right in.

CV: When the band first started a decade ago in 2004, how was it different and similar to how the group operates in 2014?

Eric: When we first started we would just play at house parties and backyards. It wasn’t until 2008 that we really got on the road. Since 2008, we have built a lot more experience as touring members. I think we have seen a lot of the country and world along the way, and we have become more comfortable doing what we do for a living.

CV: During a cross country tour, does the band use a tour bus or airplane to get from city to city? 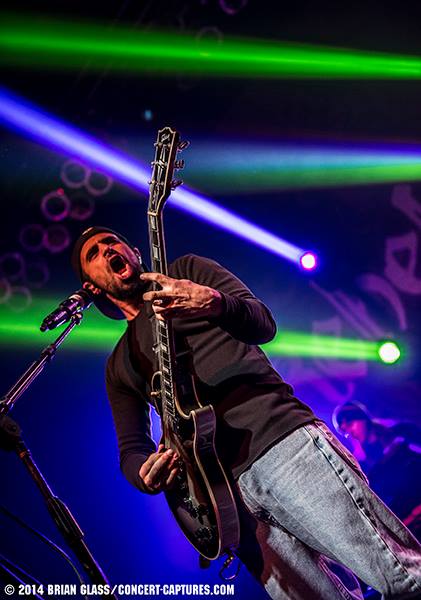 Eric: (laughs) Well, if it is a tour that is nationwide we will get on a bus to get everywhere. Occasionally it will be a time when we need to get across the country to get their for a show, and we fly back to resume the tour. Usually, like right now, I’m on a tour bus.

CV: Is there any unique forms of inspiration that you use to create music?

Eric: I started getting into yoga for both exercise and mediation. It’s really perfect for what I do because it helps with my flexibility. It is also a time when I can relax and focus on my body, and who I am as a person. I think for me it works having that outlet, and it is something very exciting for me to explore.

CV: The band recently performed at The Pageant Theater in St. Louis. Rebelution had also performed their in 2011. How does it compare to venues sonically to other venues on the tour?

Eric: Yeah, it’s great. It is one of my favorites. Everyone that works there is very kind. The sound is great, the stage it great, I love the layout. I love the fans. The show we had was fantastic, definitely the best St. Louis show we ever had. It was a cold and Tuesday night I believe. We of course had the 1,400 people there. We were thrilled, to tell you the truth. It was one I won’t forget.

CV: What does the band do with downtime? 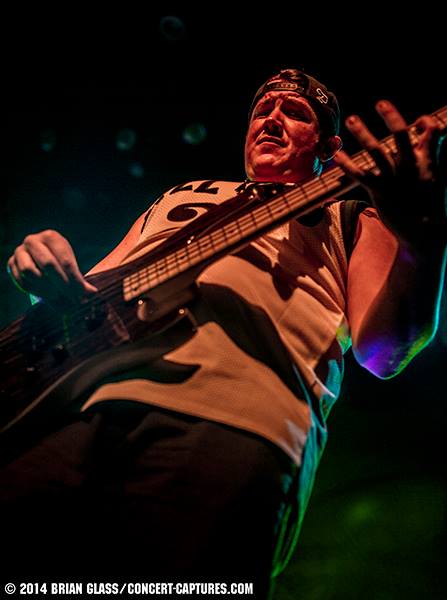 Eric: It is definitely tougher in the winter because we feel a little bit trapped on the bus with the way the weather being as cold as it is right now. A couple of us like to stay active. A couple of us are big sports fans. We are all from different parts of California. So, we have an affliction to the Bay area and down south. Everybody in the band is very different. We are all great friends, we all get along, but we are all into different things, listening to different music. To tell you the truth what we have been really working on for the last couple years, and mostly the last six months is our next album. It is pretty much done. We got the masters in today. We’ve just been writing music, recording it, mixing it, really figuring out the details for our next album.

CV: Will you releasing new tracks on this Winter Greens Tour? Have you already started road testing new songs from the album?

Eric: Yeah, we’ve played a couple of them live. We played one or two in St. Louis. We definitely plan on releasing some before the album comes out. Kind of similar to the way we did the last album. We feel that getting out new music is our top priority. I am a slow song writer, it kind of takes a long time to get the music out there. As soon as its ready. We will release it slowly, but surely.

CV: When the band has opener, like Cris Cab, is it common for the group to invite him up to the stage for an encore?

Eric: Yeah, we usually love to extend the offer to jump on stage with us. It’s really fun to collaborate with people. Everyone has their own unique style. Unfortunately, we couldn’t get Cris Cab up on the first show of the tour, but I have already asked him the past couple dates to jump on stage with us. We’re so fortunate to tour with bands that are humble people that love to play live music, and a joy to be around. We always choose who we go on tour with, and its up to the band, its not up to anybody else. We love to collaborate, its always fun.

CV: Speaking of collaboration, the band has shared the studio with several musicians. Which musician or producer has had the biggest influence on the band? 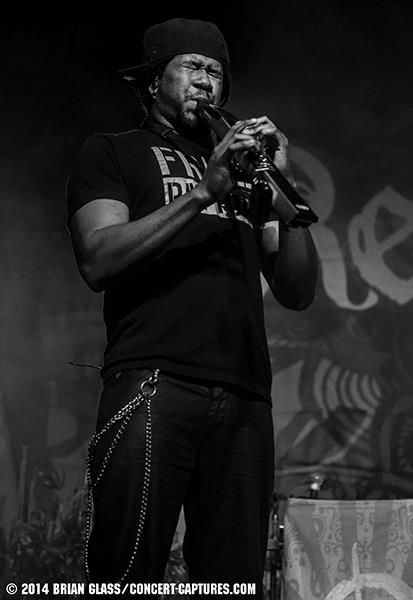 Eric: I recently got to work with one of my favorite artists, Don Carlos. He is a legendary singer out of Jamaica. One of the first people that got me into reggae music. I have been fortunate enough to become friends with him, and share the stage with him a few times. We got together for this next album, we got together for a track, short of a homage to roots reggae music. Kind of the effects that him and his band had on me in one point in my life. So, to see that come back around and do a track with him with that subject matter in the song is a pretty amazing feeling for me, and for the rest of the band. We all love his music. So, to collaborate with Don Carlos was pretty phenomenal.

CV: You mentioned performing some of the new tracks on stage. Can you let us know which new tracks you have released?

Eric: Yeah, one of them is called ‘Roots Reggae Music’ that we have played a few times the past couple shows. I don’t know if we played that at St. Louis, but ‘Roots Reggae Music’ was the song I was just talking about with Don Carlos on it. We might have played ‘Counterfeit Love’ which we already released as a single closer to a year ago. We usually play a song called ‘Destressed’ that is kind of an upbeat song to play live.

CV: You have a two night stand in Norfolk at the Norva. What pushed the band to do two nights? 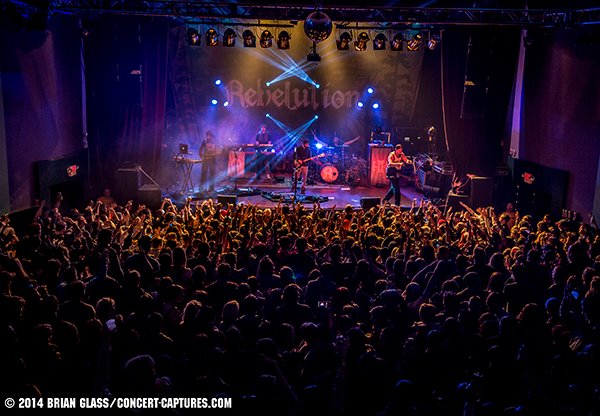 Eric: That area of the country has been really friendly to Rebeluation. We have a lot of great fans out there. I don’t know if you have ever heard of the Norva, but it is one of the best venues in the whole country. A great stage, a great crowd. It is very developed, the backstage is very unique, (laughs) I’ll say that. It has always been a great place for Rebelution. We’ve played the Norva many times now. We see a lot of familiar faces, and it’s pretty cool.

Eric: First of all I didn’t know who the Common Kings were until we played a festival with them in New Zealand about a year ago. We saw the set and we were just blown away. We thought they were so awesome. Their live set was so polished, just great musicians and really nice people. We’ve been meaning to tour with them for awhile now. So, I’m really excited to have them on tour. As far as pressure being back home or on the west coast, I don’t really feel the pressure to much anymore. I think that as soon as we get on stage, we do our thing, and we feel comfortable on stage at this point. It’s definitely very special because we have a lot of family and friends in the western part of the country. I get to see my family come out to the shows. My friends that I have grown up with in the Bay area. It’s special when you see people you have known your whole life coming out to support you. 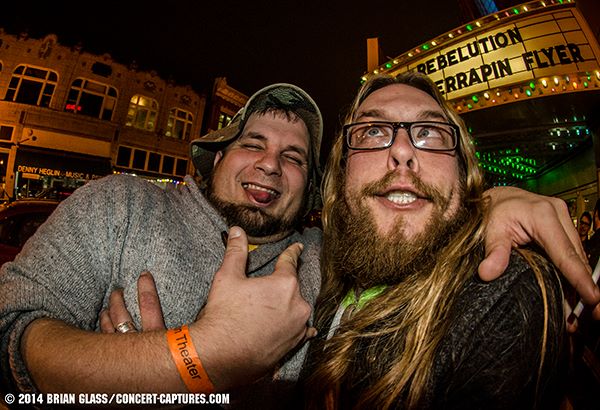