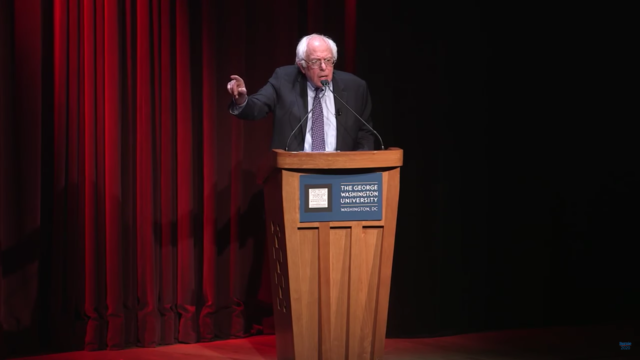 Election 2016 left a majority of the country trying to figure out why a candidate with over a million votes in the popular election could lose the overall election.

The answer is Donald Trump did a better job of campaigning in swing states with important electoral votes better than Hillary Clinton overall.

Donald Trump is not only a politician by definition, but he was better at being a political candidate than Clinton with years of experience.

What Trump did well is connect with voters on the economy. (He used the energy within the Bernie Sanders campaign on the oppression with the middle class. This is similar to how Hillary Clinton started to use Sanders’ economic plans after beating him in the primary.) The only real politician with plans to fix the country from Election 2016 was Bernie Sanders. The Democratic Party, and voters in general must overlook the massive advertising by the superdelegates during the 2020 primaries, and give an honest look at the people with thought out platforms to improve the United States. Money no longer will rule the political system with the power of information on the Internet.

What Trump is lacking at is the understanding of how higher taxes in different countries relate to lower unemployment and higher wages. He is currently under the impression lower taxes will help, but history and data shows a different point of view.

The New York Times shows how the United States has avoided raising taxes during the past 50 years. This has created the income inequality that we see today creating division within our country. The rich have gotten richer, the poor have gotten poorer, and we continue to allow the mass media to brainwash us into thinking higher taxes is a bad thing for our country. The Internet is changing the system, and I am proud to help with the political revolution taking place in the United States.

Below is a graph that connects the corporate tax with the GDP within the United States. Following WWII, similar to the Middle East War, the country acquired a large amount of debt. When Truman was in office from 1945-1953, he wisely raised the corporate tax, as well as the income tax to get our country out of debt. It worked in the late ’40s and early ’50s. Sadly, Trump will cut taxes as our country swims in debt, only exacerbating our financial problems.

Trump’s tax plan is like his plans to build a wall that could cost anywhere between 8-25 billion dollars between the United States and Mexico. It lacks logic on several levels.

The wall is actually a distraction story to keep people focused on a divisional piece of information instead of questioning the policies that the political advisors may have planned that Trump has appointed. The country is looking closely at each decision by Trump.

During Election 2020 both parties will need to be aware of the unfair advantage within the Electoral College. Bernie Sanders has mentioned a presidential race should not be decided by a select group of states, but to ensure a victory, the campaign and individuals will need to make a strong presence in the states with the most electoral votes. Instead of trying to fix or remove the electoral college, I suggest future candidates rig the system in their favor in the same method that Trump did in this past election. Once elected, please do everything you can to eliminate and decrease the power of the electoral college for future elections. The overall vote should elect the president, not a handful of states with more people.

Watch the speech below on YouTube from George Washington University with Bernie Sanders.

A Year in Review with the Top Articles in Music, Film & Tech from 2016

How Climate Will Change during the Donald Trump Era

30 Days, 30 Songs with Music by: Death Cab for Cutie, Aimee Mann and More