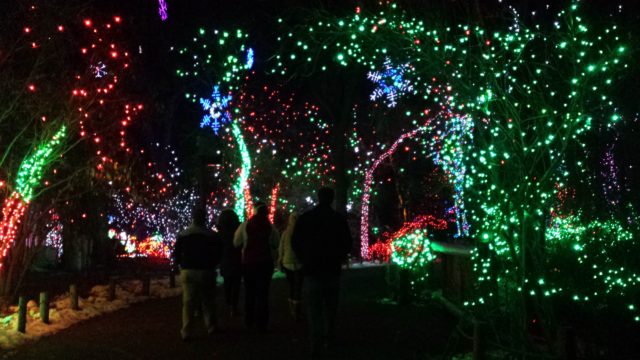 Denver Zoo is currently holding holiday events that showcase different elements of the park after dark.

The park was opened on Christmas, and a group of friends wanted to check out zoo. It was my first time attending the Denver Zoo, and was impressed with the grounds overall.

One of the elements that caught my attention was an art exhibit known as Washed Ashore. They collect trash from the the oceanside and recycle it into gigantic pieces of art.

During our tour of the grounds, we all noticed these large sculptures of different animals. After finding out more on the Washed Ashore program, it created several layers of additional depth to an art exhibit at the Denver Zoo.

Along with the Washed Ashore art installations, the zoo designed a walkthrough with different lighting arrangements to explore. We checked out a variety of different living environments that were available. One of my favorite sections was the penguins from South Africa. Only one of them was out during our visit, and it appeared to be their resting time.

In addition to the penguins resting, we also checked out a bald eagle and a condor taking a big nap.

Elephants that weighed over 10,000 pounds were getting exercise in a heated area. A rhinoceros was also taking a big nap. The size of the rhino was impressed. In connection, the hippopotamus we saw was also massive in size.

One of the pieces of attending a zoo that I pay attention to is the treatment of animals in their environments. The Denver Zoo did a good job of providing a safe area for the animals overall. I could see how some animals would not want to be confined in a small space. On a converse point of view, if these animals were in the wild, there is a larger possibility of them not getting the proper resources to survive.

In one section of the zoo they displayed animals from different regions of the world. It was informative to see animals from Africa in one area, and browse over different species that exist in the Colorado area.

Learn more about the Washed Ashore program with the YouTube video below.

The Making of a Marlin: Costa Sunglasses and Washed Ashore