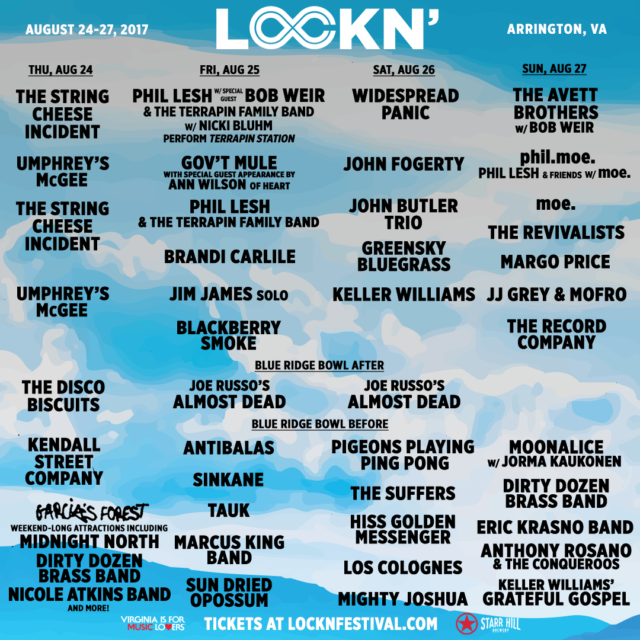 The LOCKN Music Festival will take place this upcoming August 24-27 in Arrington, Virginia with special performances by moe., Phil Lesh, Bob Weir, and The Avett Brothers.

This festival will mark the last performance by moe. before the band goes on an indefinite hiatus.

The festival is packed with special performances, but these three performances stand out as the most anticipated sets of LOCKN Music Festival 2017:

After a large response on social media, I realized that it would be interesting to tally up the votes from the people on the LOCKN’ Festival facebook page, and put together the data from the people. The record of information was compiled to show which concerts people are talking about online, and not to be a popularity contest. One of the beautiful pieces to LOCKN is their ability to provide the best music on stage, regardless if it is popular or not.

Personally, I support Rob, bassist for Moe., taking time off to get rest. I understand some people that read this original article felt like I was leading them to believe Rob would be performing with Moe. Deep down, I am just a huge Moe. fan, and know they will deliver big on stage for their final set before taking a break.

When calculating the votes, I did count more than three votes. If someone voted one band, like many Widespread Panic fans, than I just counted one vote.

The voting and record is overall not meant to be taken that serious.

Additionally, Thursday won overall with six votes. Friday came in second with four votes, and Saturday and Sunday each got one vote. We were not voting on which day was the best, some people just like to be different, and I like to highlight those kind of people.

Watch over clips featuring these acts on YouTube, and connect with LOCKN Music Festival on social media for updates. The festival’s RV camping options have sold out, but tickets are still available. LOCKN recently announced single day camping options.

"This Must Be The Place" with moe. and Turkuaz

On Sale! Camping is part of the LOCKN' experience. If you can't make the whole weekend, buy Single-Day Camping! https://t.co/BgKjhYL8zl pic.twitter.com/1FQOxqw1XS