The All Good Music Festival is coming up this weekend, and we are providing media coverage for the event. Each music festival has a collective energy that occurs when multiple acts perform in a short block of time.

This year, the All Good Music Festival in Thornville, Ohio has setup a lineup of bands, vendors and artists to amaze and awe guests from around the globe. 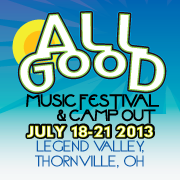 In order to showcase the amazing talent at the event this year, we have been conducting interviews with the bands featured at the event to give background information on their craft and upcoming plans.

Recently we released a Top 5 Must-See acts article that caught attention nationwide. Artists from all walks of life will be performing live on stage. This article is to provide insight on the Top 5 Breakthrough Acts set to rock out on Buckeye Lake.

We understand each artist has the potential to have a breakout moment during any set. We hope every artist goes after each performance as it is their last. We have found some artists that go for the gusto when they hit the stage, and have listed them as The Top Five list includes: Superhuman Happiness, The Soul Rebels, The Revivalists, The Werks, and Beats Antique.

New Yorkers known as Superhuman Happiness create an organic essence in their music that lifts emotional and psychological moods. The natural sensation of positivity in their sound seems to be a healthier option to what can fit inside a pill. Their refreshing take on music helps land them at number five on the breakthrough act list for the 2013 All Good Music Festival.

The Soul Rebels rock a New Orleans swagger with a heavy set of brass instruments ready to blow minds every time they play. I was able to catch one of their live performances recently, and had me dancing out of my shoes. Their set is a boilerplate of soulful music ready to pop off at the seams at anytime.

The band is having a breakout year with performances at Austin City Limits, the New Orleans Superbowl, Rothskilde Festival in Copenhagen, as well as many other special shows around the globe. This Sunday, July 21 The Soul Rebels will be making their mark at the All Good Music Festival. They will be closing down the action for the weekend on the Crane Stage from 4:00-5:00 p.m. on Sunday.

New Orleans is known for breaking new trends in music history. The Revivalists continue to share the cities rich musical tradition with audiences all over the world. Their music has broke through to the mainstream, and there is no turning back for this amazing act.

David Shaw, vocalist for the act recently talked with us about the band, and how they are evolving with a fast pace society. For more on that interview check out the link at: David Shaw Interview.

The Werks, currently based out Dayton and Columbus, Ohio have been soaking in the Americana moments on the road this summer as they tour around the country. Last December, I watched my first performance by The Werks at the Riviera Theatre in Chicago around New Years. Since that show I have already seen them twice, with two to three more shows available to catch at the All Good Music Festival. The band delivers every set, and makes each performance count.

Rob Chafin, drummer for The Werks, talked with us today about the All Good Music Festival, and plans coming up after this big weekend.

Q. How is performing at a music festival in your home state? Is there any additional pressure for the long-term fans in the crowd?

“We have been looking forward to All Good since the moment we walked off stage last year. I can’t wait to play this festival again. Tim Walther and everyone involved does an incredible job. It is our favorite festival to play. We don’t look at it as pressure, we look at it as a very big show for us. In order to do that we are going to mix in a little bit of old songs, a little bit of new songs and a couple of more surprises during the set,” Chafin said.

“We are doing an acoustic set on Saturday afternoon, as well as sitting in with the Everyone Orchestra. The All Good Music Festival is a very special festival. We are excited to show everybody what we got,” Chafin said.

Q. After the All Good Music Festival the band will have The Werk Out Festival on the horizon. How do you plan for that event?

“The Werk Out Festival is going to be a big one. We only play Ohio three times besides New Year’s Eve each year, and they are all music festivals, (laughs). Every year it gets better. Every year it gets bigger, and our family grows. We considerate the people our family; the close knit group of people that work hard to make The Werk Out happen. It is definitely something special,” Chafin said.

At the top of the list for Breakthrough Acts set to explode on stage at the 2013 All Good Music Festival marks Beats Antique. The Oakland, Ca based act has been stealing the show at all of the major music festivals across the country. Their appeal is undeniable. Their music is unexplainable, and their performance is untouchable. Beats Antique is set to cap off entertainment on the Crane Stage for Thursday, July 18.

Tommy Cappel, drummer for Beats Antique conferenced call us during his travels out west on Friday, July 12. For more on that interview follow the link: Beats Antique Interview Link.

Galactic, Antibalas and Andy Frasco Mix it Up at The Fillmore Auditorium in Denver